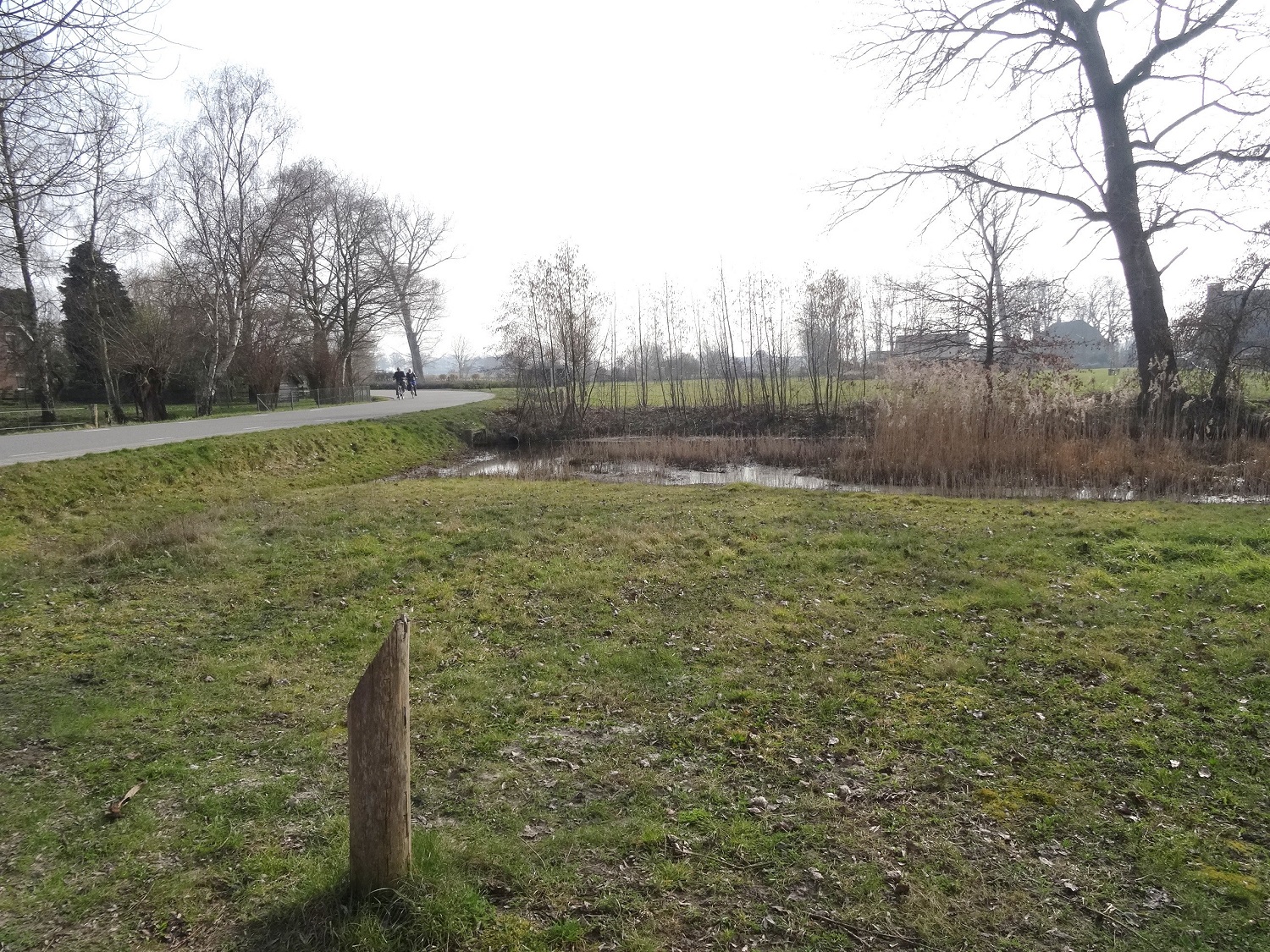 The harbour at de Kade west of Ede near the boundary with Veenendaal
to the west and Bennekom de Kraats to the south.
With the draining of Lake Almere in 1134, the area west of De Kade
became marsh and the harbour was reached by a canal wide
enough to allow barges (schuiten) to pass in both directions.

From Roman times until 1134, including to the time of Willibrord (†739) and Boniface (†5 June 754), the south Vallei was filled with Lake Almere held in by a natural dam of higher ground in the south from the Nude to Brakel (now in Wageningen). Lake Almere stretched north to Manen west of Ede with a peninsula, the present-day Kraats. De Kade, in the 8th Century called Dockinga, 'dock-workers place', and Harselo at the western tip of the Kraats peninula were ports from which pig iron, 'wolf', was exported in barges to Dorestad, a river port under the Heimeberg, the promontery of the Utrecht Hill Ridge at Rhenen. There, on the south side of the Rhine, was the Roman fortress Traiectum, Trecht. This was given to Willibrord and his 11 companions in 690 by the palace mayor Pepin. Evidence of the function of the Kade at that time include the names Wolfsdijk, 'pig iron dike' for the approach road, and Schuttersweg, 'bargees road', further east. Recently a Celtic village called Dol/Tuil was discovered before the development of the Frankeneng industrial estate. The ground there was covered with a layer of iron ore.

The misionaries Wilfrid and Willibrord disembarked at Trecht. They did not visit Utrecht, which is absent from the records and archaeology from the departure of the Romans until 870 (g54 u77). For St Martin's Church in Trecht, Willibrord was granted estates nearby in the Betuwe and the south Valley, including Husden/Opheusden, Winlindechun/Lienden, Bunninghem/Bennekom, Mocoroht/Moft (Celtic village east of Bennekom) and Edethorp/Ede village.

In 753, Boniface with about 50 monks and guards crossed the lake from Trecht to Dockinga/De Kade and stopped for the night by a stream, the Maanderbeek. In the morning, they were attacked by an armed band and many were slaughtered, perhaps local 'heathen' or more likely servants of the Bishop of Cologne who was trying to usurp episcopal rights to the bishopric. After the murders, the monks of Trecht built a chapel in Manen on the site of the murder, which became a place of pilgrimage. At least five abbeys acquired estates around Manen, including Fulda, where Boniface was buried, probably intended for overnight stays. The church in Manen survived into the 19th Century. The harbour basin at de Kade from the south-east. The basin and canal
are overgrown with reeds and can dry up in summer.