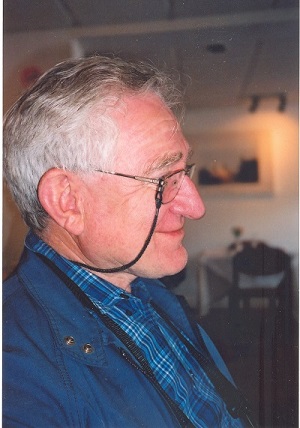 A vivid memory is of the bombs on Sheffield, going outside from the cellar and seeing a row of houses at the back collapsed like a pack of cards.

Once his father, then over 50, took him to the Botanic Gardens. ‘How nice that you can take your grandson for a walk.’ He never took him for a walk again but perhaps it had awoken an interest in the natural world. The family moved from the bombs to rural Leicestershire.

Another vivid memory is of seeing our new home, a 29-room rectory; many were never used, except for storing apples. Christopher enjoyed the farming, natural history, local history and Latin, encouraged by school teachers of biology, history and Latin. The accepted history of the Battle of Bosworth taught at school was quite different from the village traditions, which told that Richard III spent his last night at the Mythe, suggesting that the Battle of Bosworth was further west with Henry near Fenny Drayton and Lindley.

He contributed to a book giving this alternative interpretation of the largely Tudor-biased records. An ancient road north from Fenny Drayton was called Derby Lane. Was it named after the Earl of Derby, one of the plotters against Richard III? No, it proved to form part of a prehistoric track running due north-south within 1 km east-west for 250 km from Ripon, through Derby and Coventry to Edge Hill, thence connecting to a route to Stonehenge.

Frederick Bodmer's The loom of language opened up a new world of comparative linguistics. At London University, he studied the sciences. During a vacation, he cycled to Dover and saw white cliffs across the Channel, proving to himself that the Continent really existed. During that trip, he experienced Walloon French, German, Luxemburgish and Alsatian. German immediately proved useful in his study. National service followed in Lancaster, Beaconsfield, Minden and Bergen-Belsen, now called by the friendlier name Bergen-Hohne. By then, he had a reasonable grasp of the main European languages and put them to use in Aberdeen working in a nutritional science information bureau at Aberdeen. His geographic and historical interests were widened by meeting and marrying a young Australian, Margery, on sabbatical. She was tracing her forebears on the Isle of Skye, who were put on a boat during the Highland Clearances. During that period, Christopher was persuaded to train as a reader of the Episcopal Church, taking services in Aberdeen and along Deeside. He continued that voluntary work on the Continent, mainly in Eindhoven, Nijmegen and Zwolle, where it involved much pastoral work, into Belgium and to the German border. The folding bike was an essential aid.

The move to the Continent came from an invitation to work in Wageningen in agricultural information. It required a knowledge of East European languages. ‘Shall we go there for three years or so?’ He was a member of working groups of Unesco, the European Union, the International Union of Pure & Applied Chemistry and the International Federation of Clinical Chemistry. Over fifty years later, most of the family is still in the Netherlands.

With retirement, there was the chance to take a degree in theology at Utrecht. With the training in the ancient Semitic languages and scripts and the sources to hand, he traced information on water supply and management in the Bible and the ancient Near East, also with dendrology and sedimentology. He was able to date the prolonged drought, in which the ancient civilizations of the eastern Mediterranean and Near East collapsed, to 1190–1150 BC.

During work at Wageningen, the family lived in Randwijk and Zetten in the Middle Betuwe, the parts visited by Boniface 1300 years earlier. Shortly before retirement, they moved to Bennekom on the border between the damp Guelder Vallei and the dry Veluwe, a stone's throw from where Boniface was killed.

In recent years, he has turned to local Dutch church history, finding reasonable evidence that Bishop Meinwerk of Paderborn founded the churches of Renkum and Bennekom in 1016 and how the Anglo-Saxon missionaries of Celtic and Roman traditions worked in these parts 300 years earlier.